Piggyback costume and the Ghost Tree

We've been custom costume, mask and prop makers for over 25 years.

This blog is a peek behind the Tentacle curtain, written mostly by Bev.

23th Jan 2020
Irish comedian Ger Carey is producing a new theatre show for kids about literacy, and needs a colourful, child-friendly costume with an alphabet theme. This character has to eat some letters during the show, so the egg's big smiling mouth is the perfect solution! 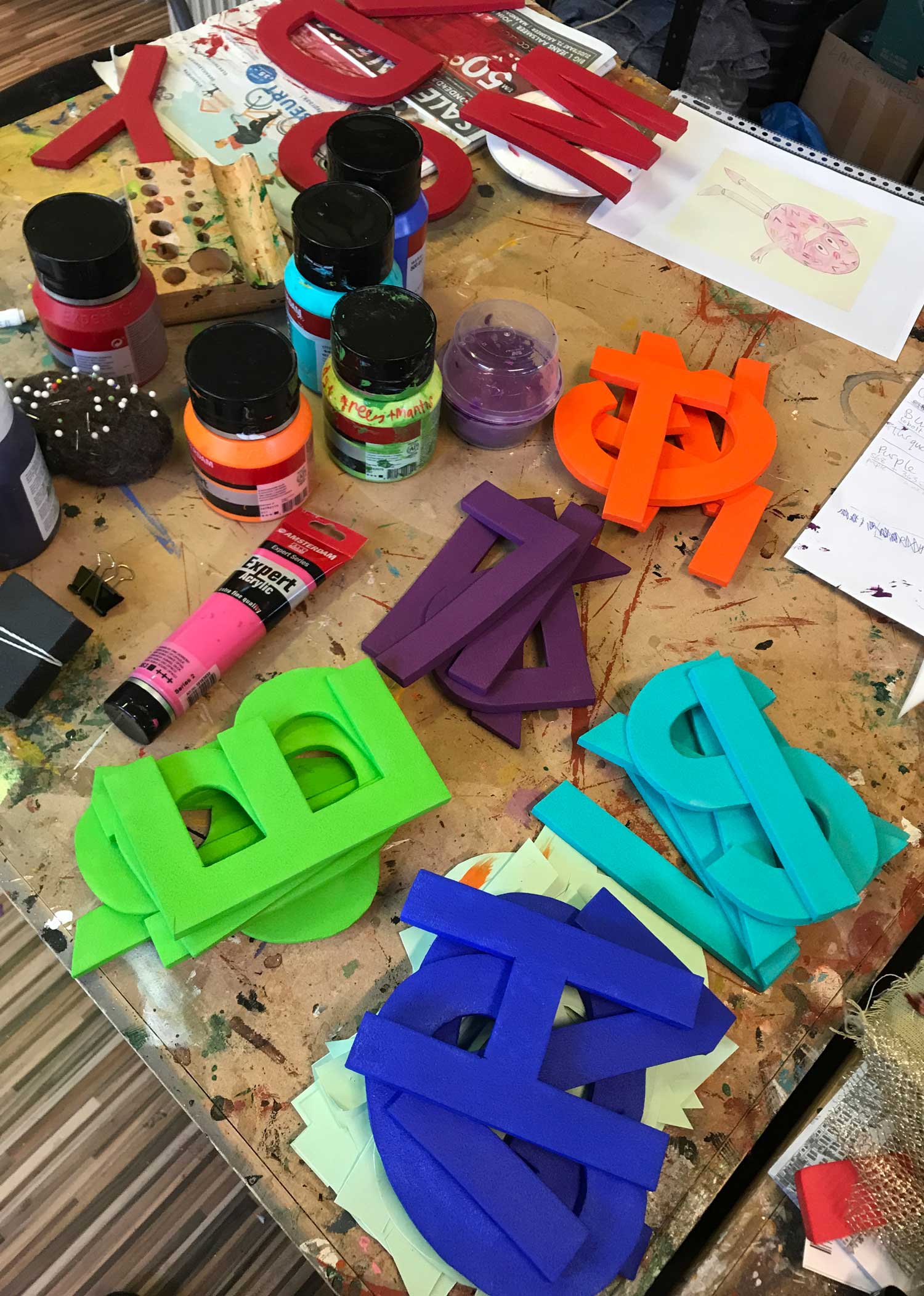 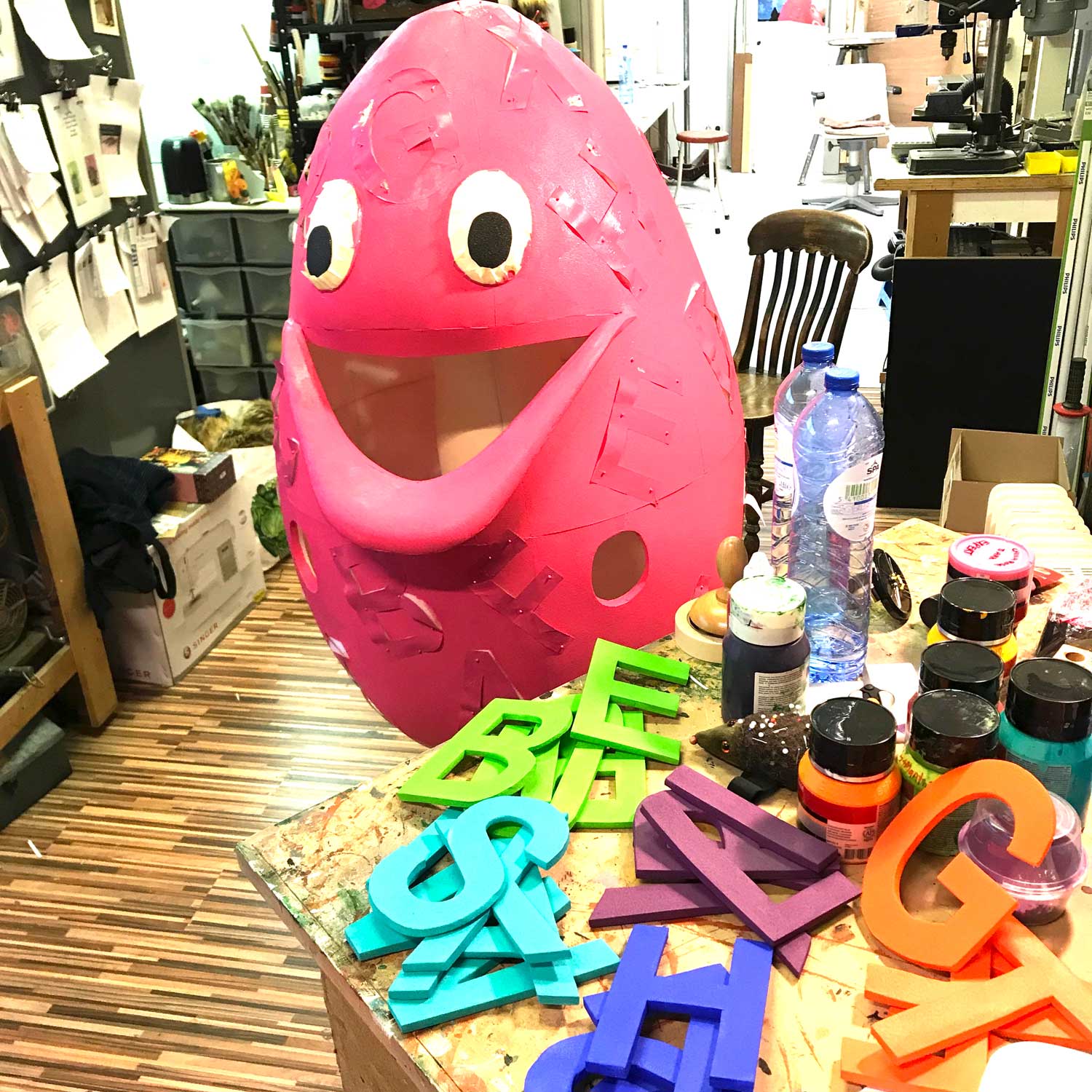 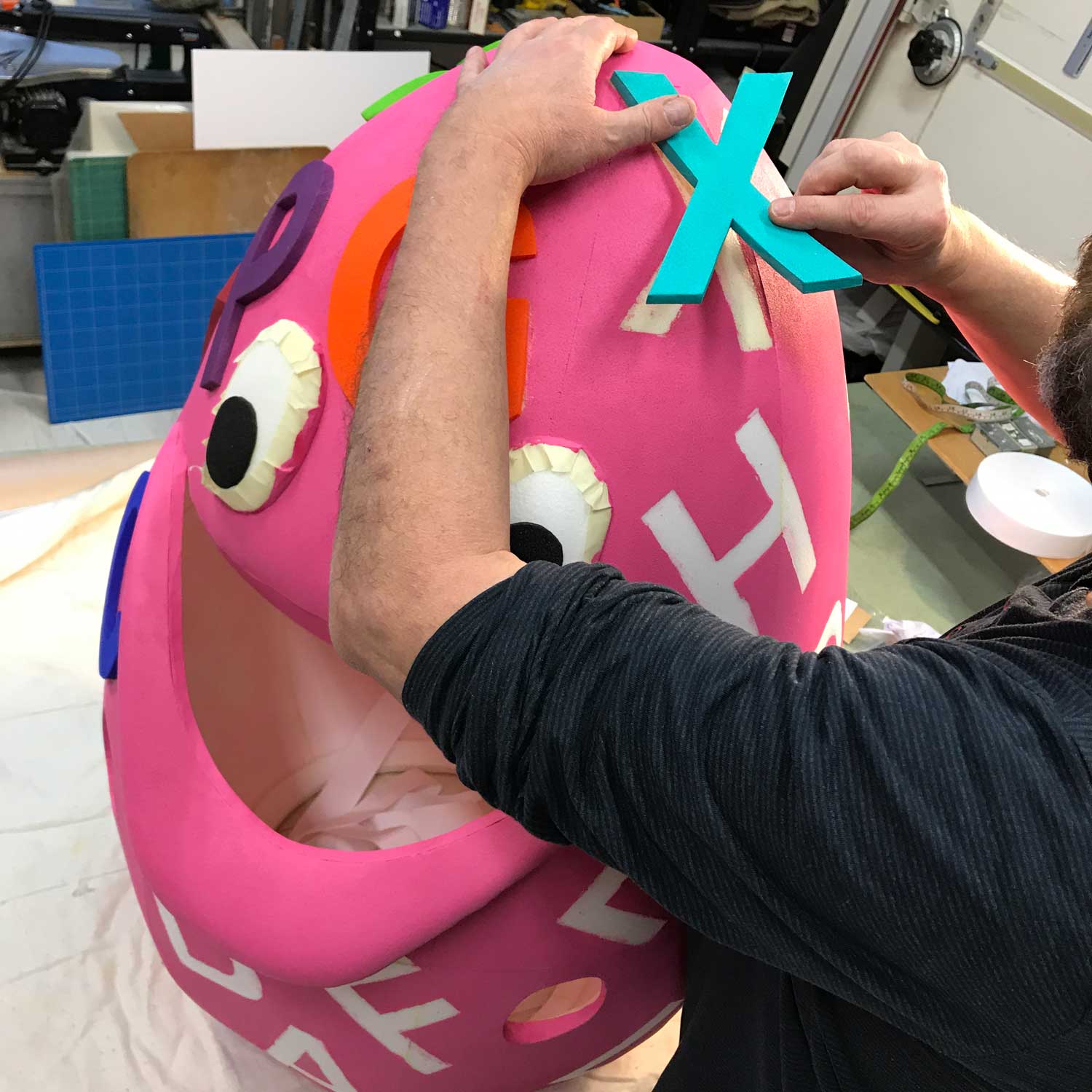 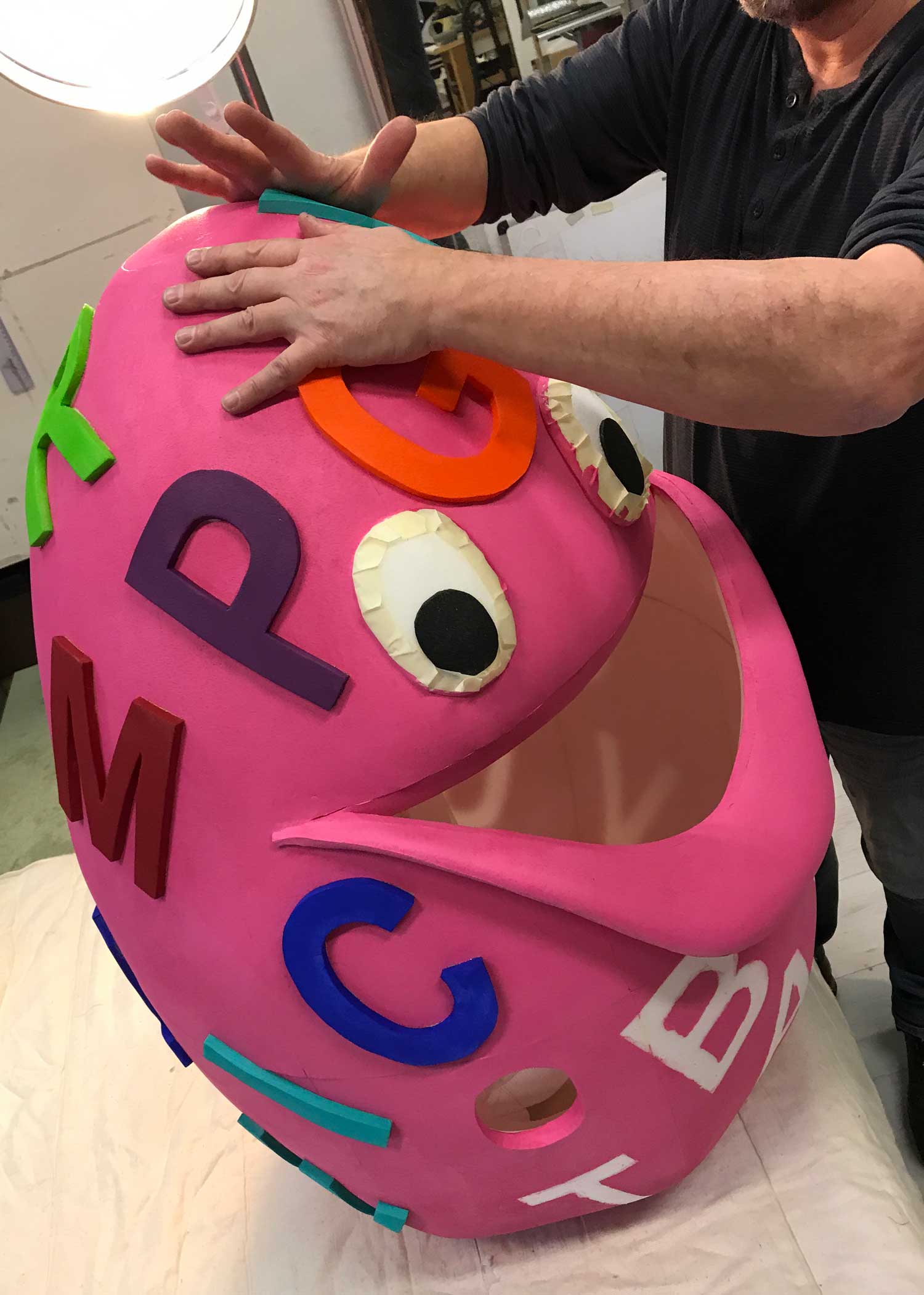 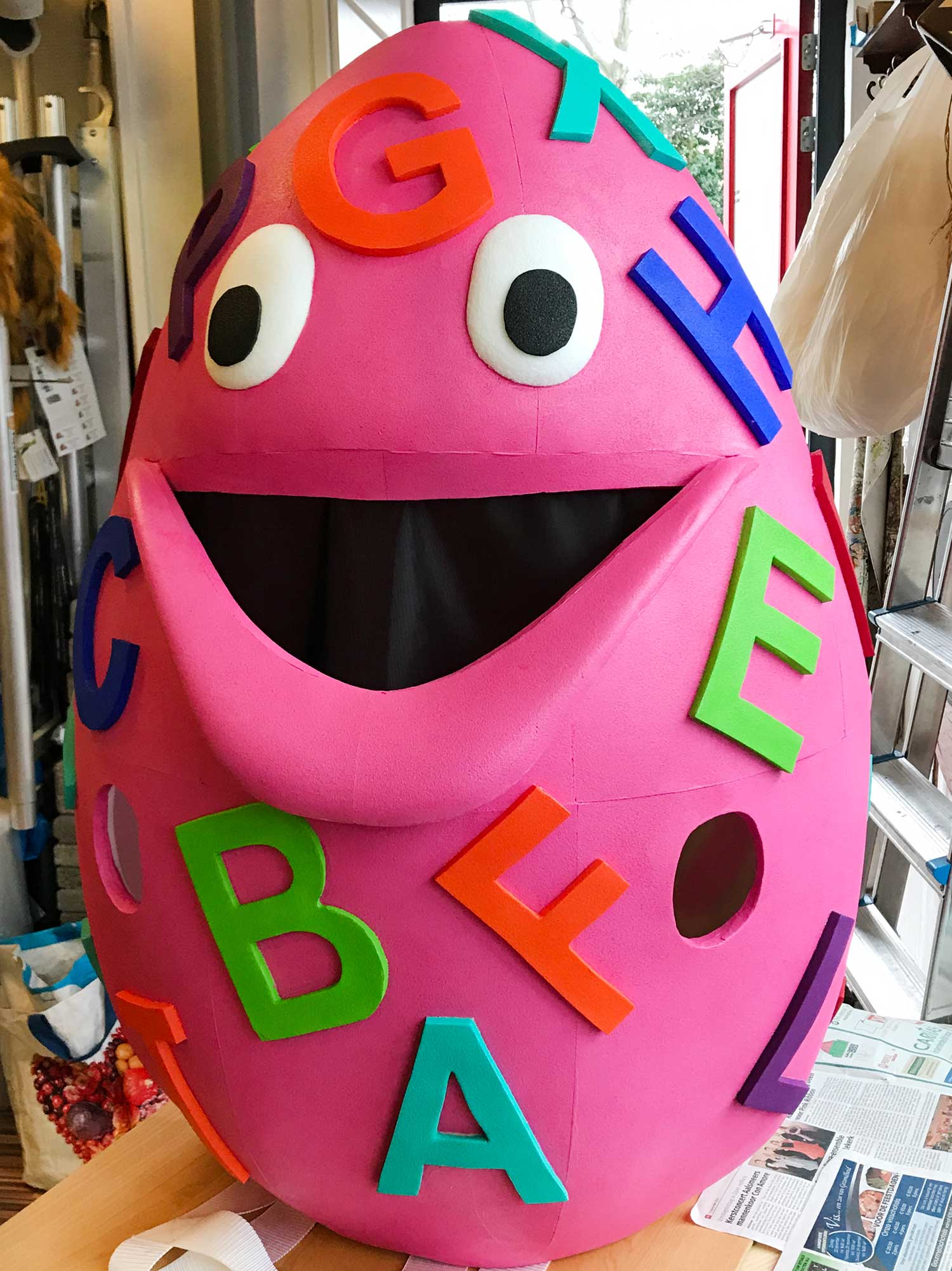 13th Jan 2020
We created these custom made fruit head masks, to launch a new product range for a brewery. 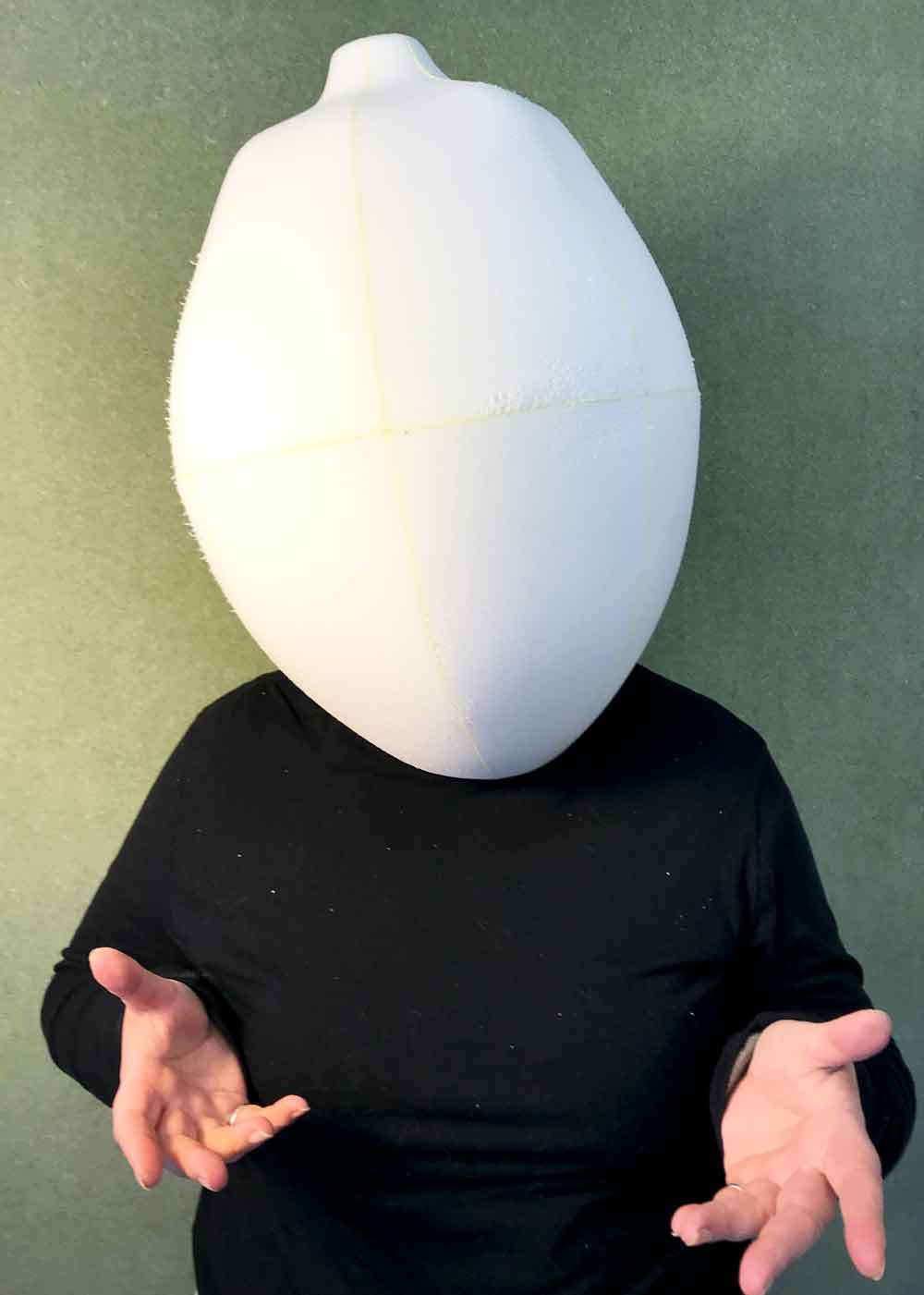 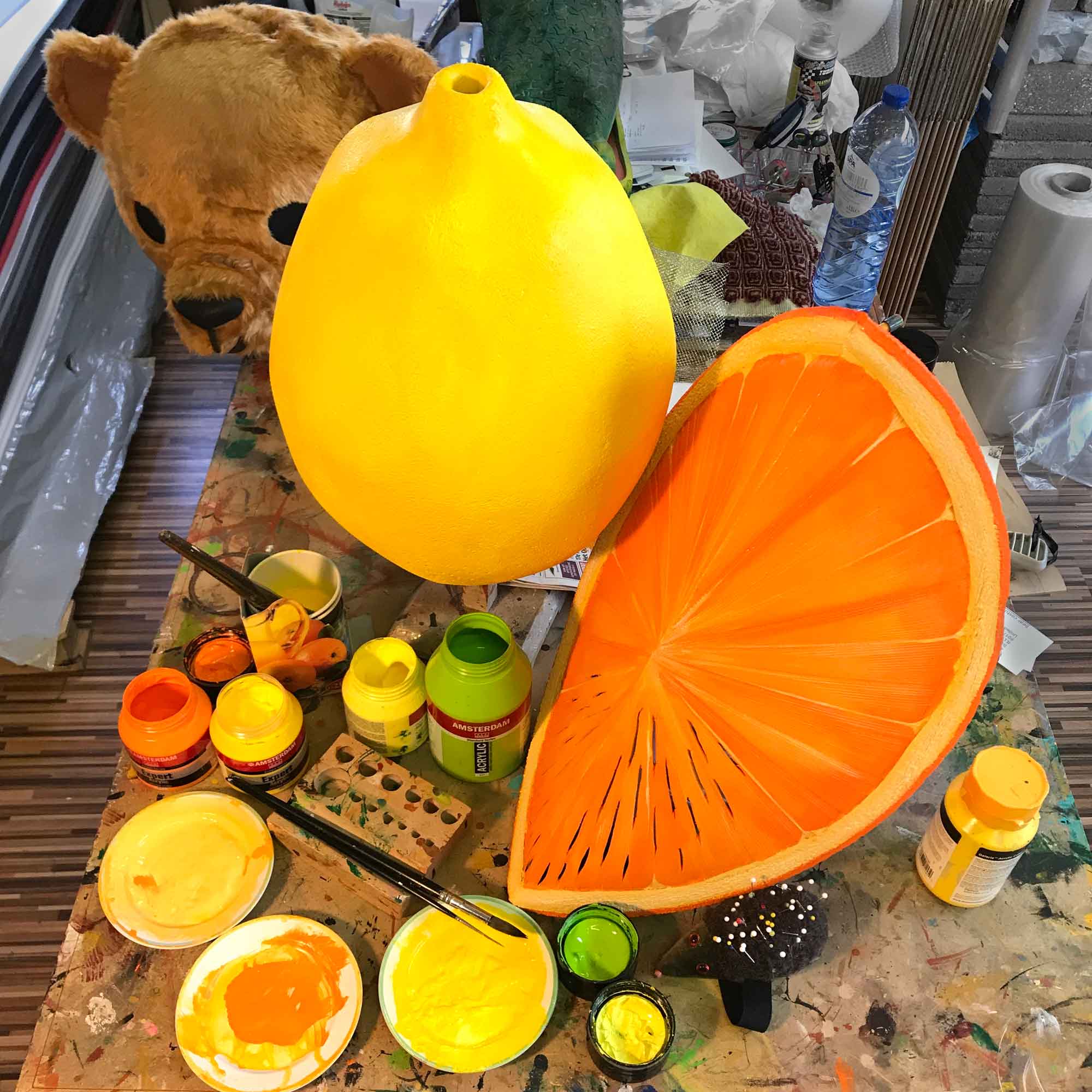 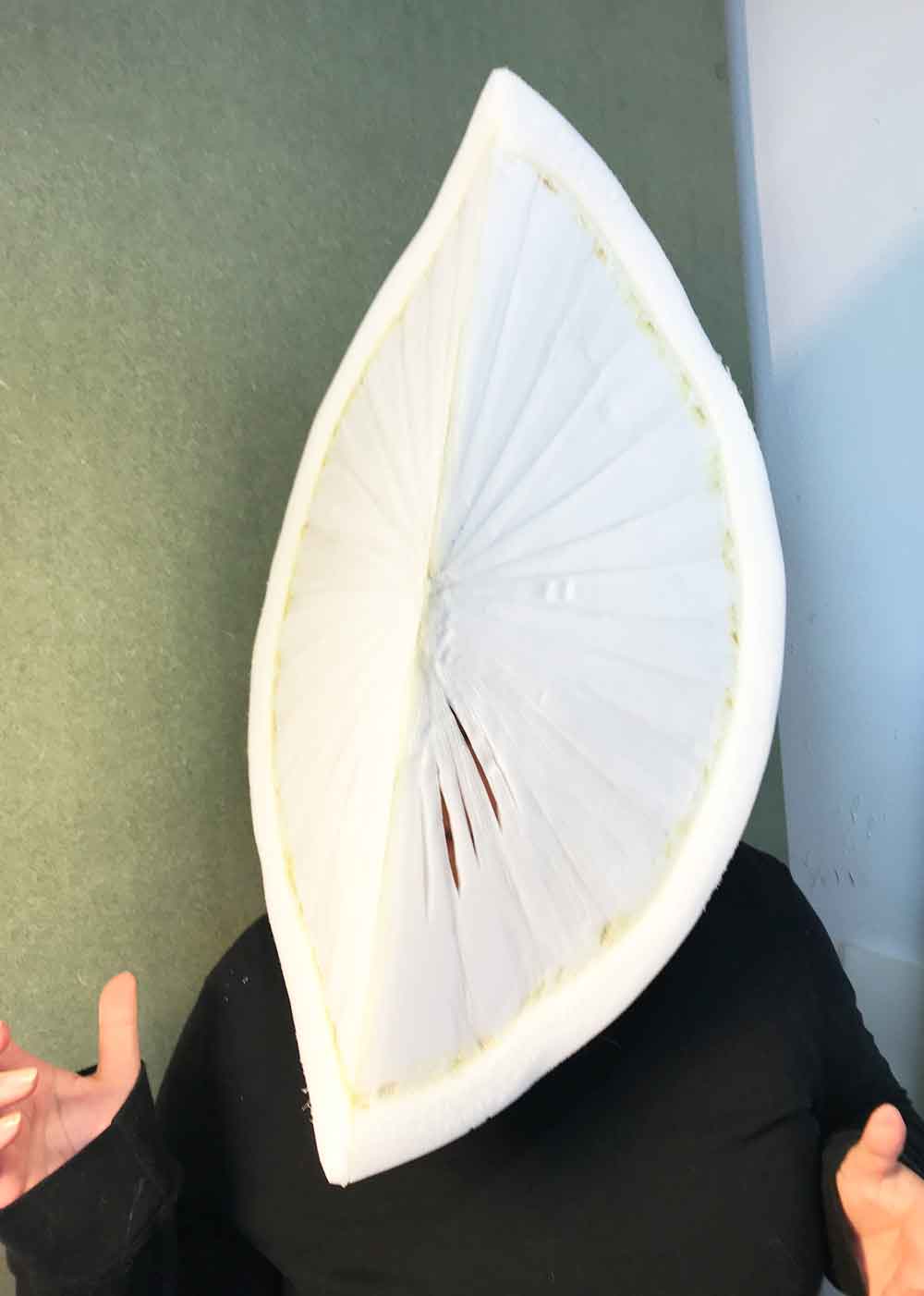 20th Dec 2019
It's the most Nutcracker time of the year! As usual, the run up to Christmas finds us creating Nutcracker heads for many different Ballet companies around the world. The most notable Nutcracker commission this year came from California's Santa Barbara Ballet, who asked us to custom-make a wearable, light weight head to match their much-loved Nutcracker doll that's been on stage with them for more than 40 years! We loved the happy, friendly character of the original doll's face, so it was great fun to sculpt this larger head for them. 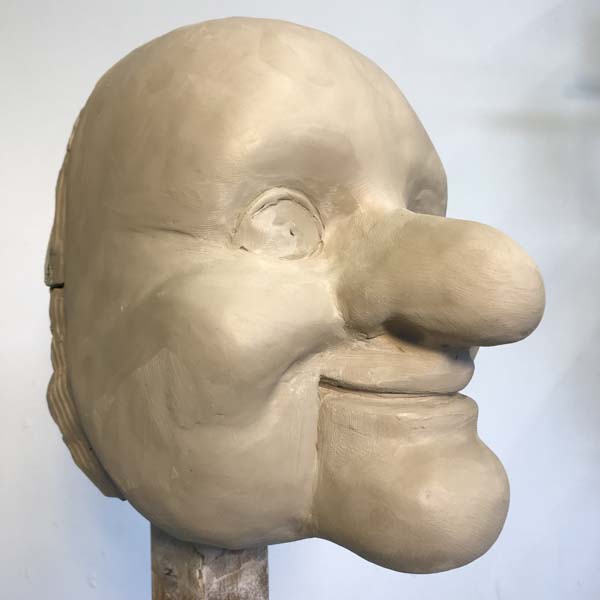 10th Dec 2019
Time was short, but we managed to finish this custom dancer's feather headdress in good time for Aya Serpent's mystical dance performance! Her dance group creates truly beautiful performance rituals. Her website gives you a good feeling for what she does, and is well worth a look: Aya Serpent Website. 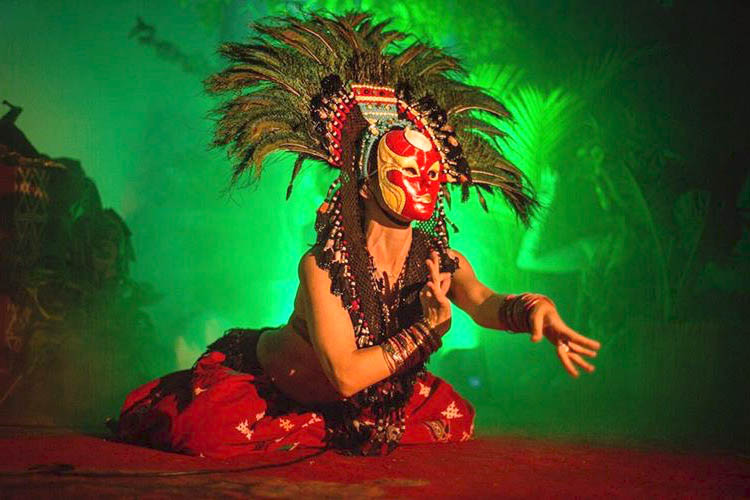 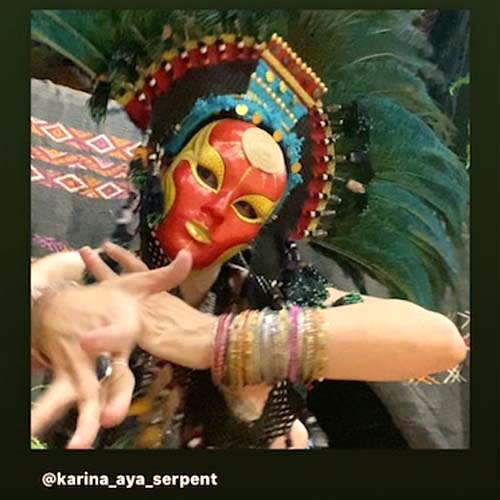 13th Nov 2019
We made this custom cat head for Chinese DJ Sad Cato, and there he is in the video! 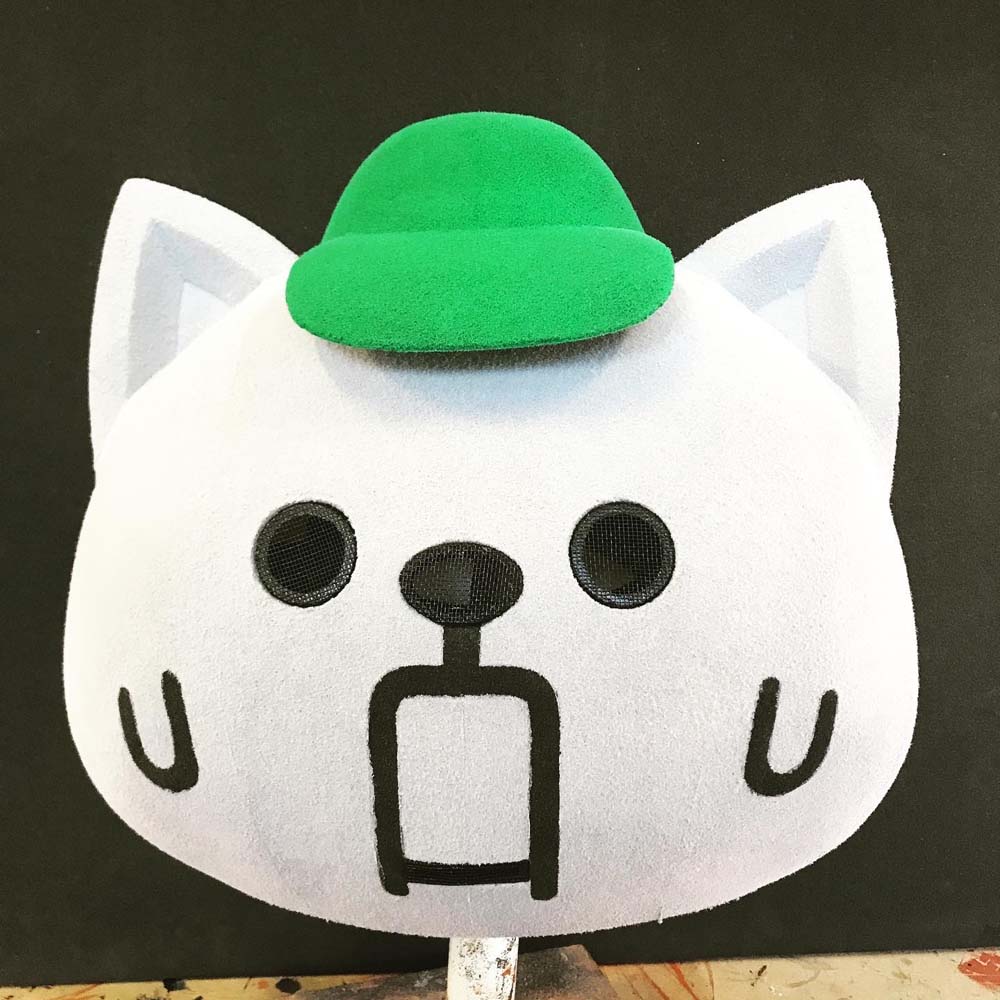 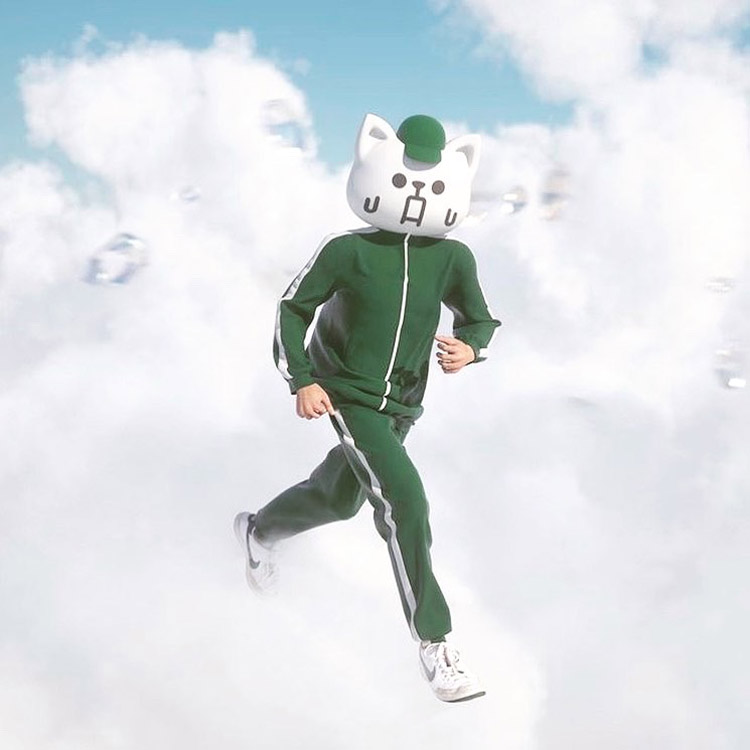 26th October 2019
Last week, we were feeling flush but exhausted after some well paid commissions. So on a whim, we took a trip to the ancient Greek island of Delos to see an exhibition by sculptor Anthony Gormley.
Delos has always been a very special place: inhabited since 3000 yrs BC, for millenia it was a famous port and holy sanctuary. It is also the legendary birthplace of Apollo. The island's extensive ruins include Doric temples, markets, an amphitheater, houses with mosaics and the iconic Terrace of the Lions statues. There's no airport or accomodation on the island. The best bet is stay on the neighbouring island of Mykonos, so that's what we did. 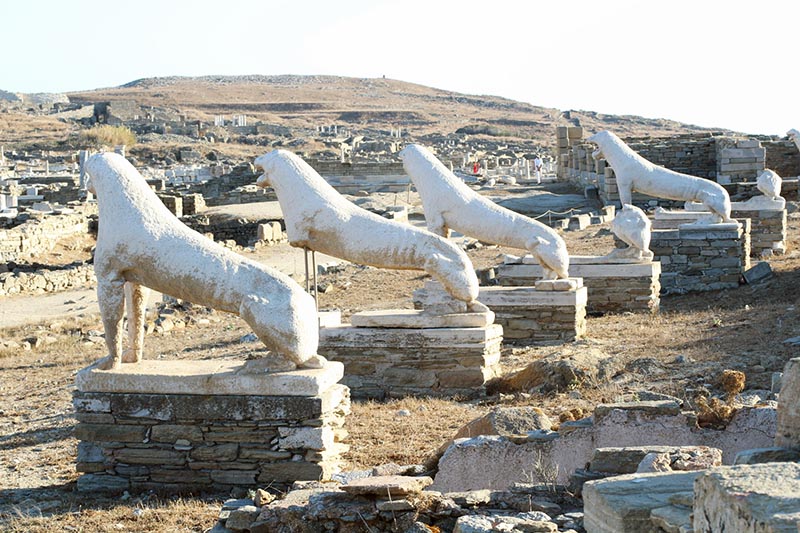 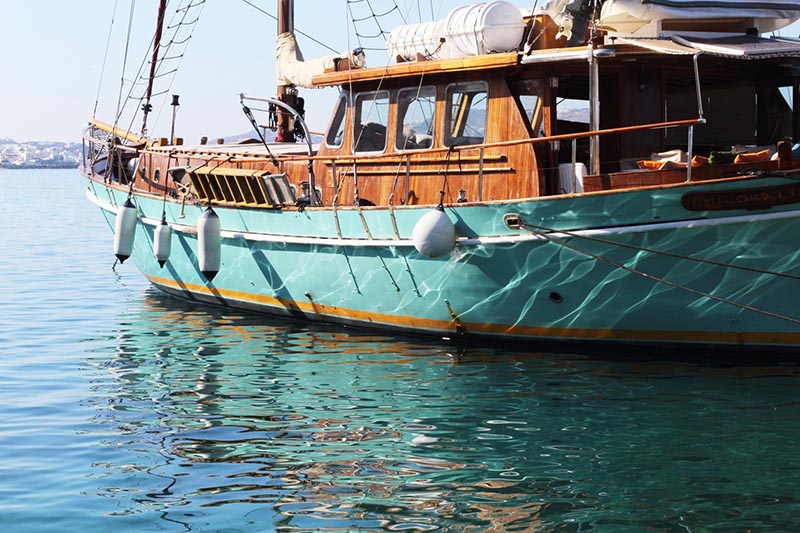 I'd heard Mykonos is a mix of wealthy party people and a 'dream wedding' destination. So I expected the contrast between modern Mykonos and neighbouring ancient Delos would be quite eye-opening, and I wasn't dissapointed. Mykonos was unlike any other Greek island I've ever been to; in addition to hordes of young party people, the harbours are jostling with cruise ships and big yachts. This leads to a whole culture of golden bling jewellery, and rows of snooty restaurants with way too many beige scatter cushions and astronomical prices! At the old windmills (which is the main tourist photo op on Mykonos) any day you pass by, you'll find swarms of young women aged 15-25, all taking multiple selfies. Every day: different girls, same poses. Totally focussed on their screens; it was weird. 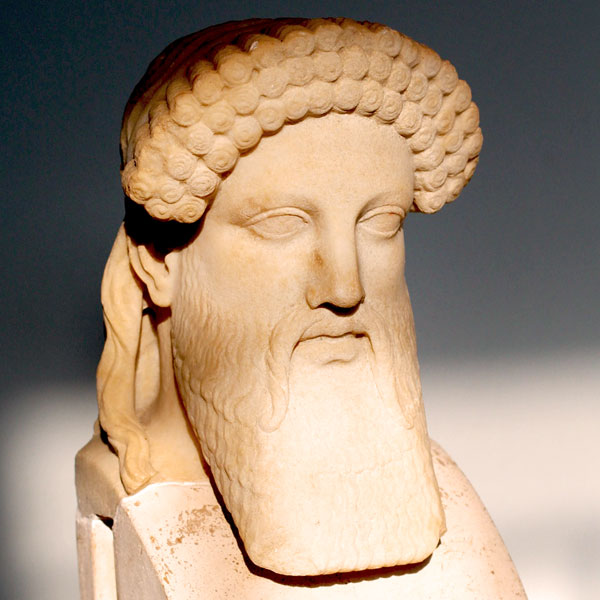 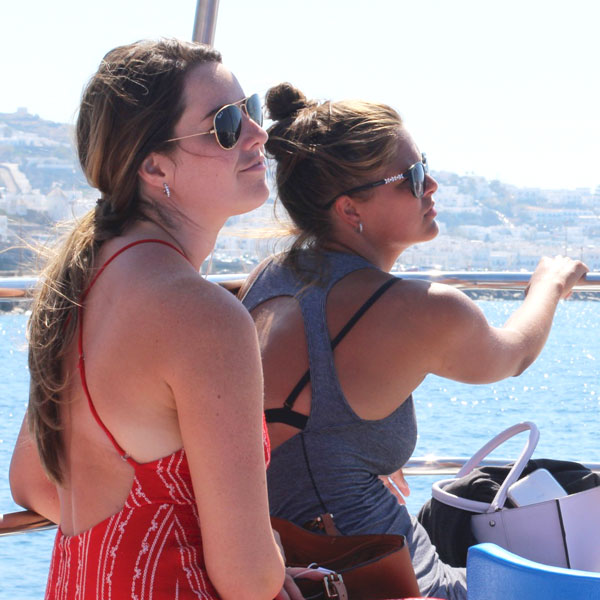 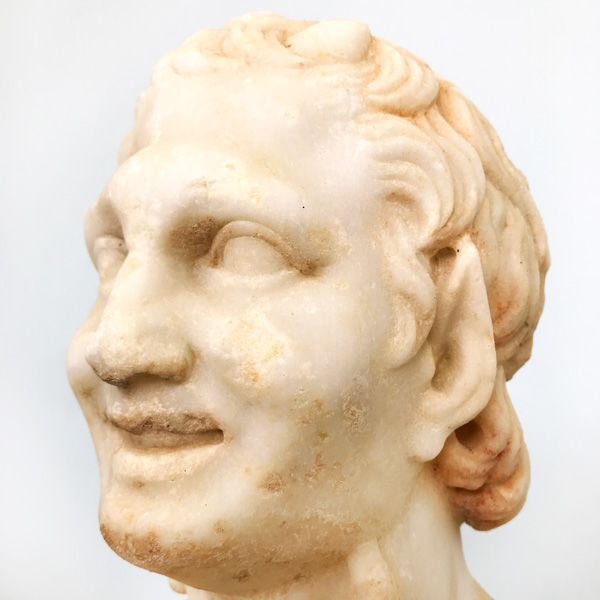 After 2 days of Mykonos madness and bling, Delos was literally a breath of fresh air; the Greek sunshine and the warm sea were as timeless as ever. The ruins span many centuries, and stetch over the whole island, so at every turn there was something new to explore.

Gormley's sculptures, which were dotted about the island, were sometimes dwarfed by the scale of their surroundings, but some of the more wistful ones; namely a lone figure gazing out to sea- really captured a spirit of eternity. 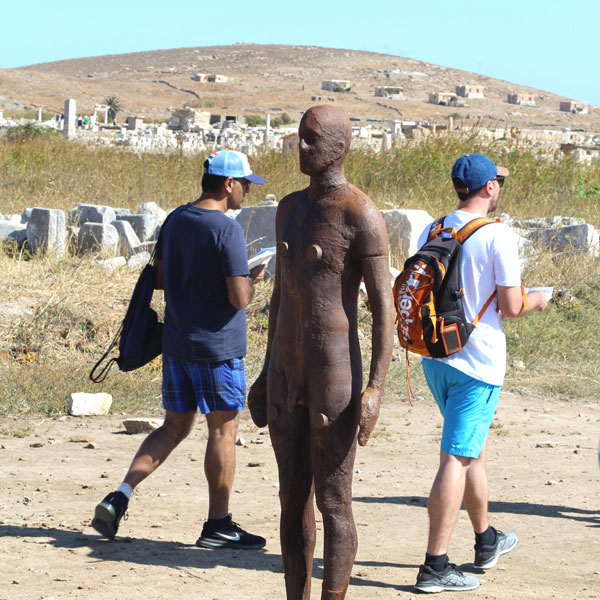 Back on Mykonos, we were determined to escape the bling of the town. We hired a car, and were delighted to find perfectly secluded beaches around every turn of the road. And plenty of typical tavernas, with ancient Greek grannies in the kitchen, making delicious home cooked food, and serving it with love. This holiday (or 'field trip' as Mike insists on calling it!) was full of contrasts; ancient and modern, calm and commercialism, ice cream and ennui. 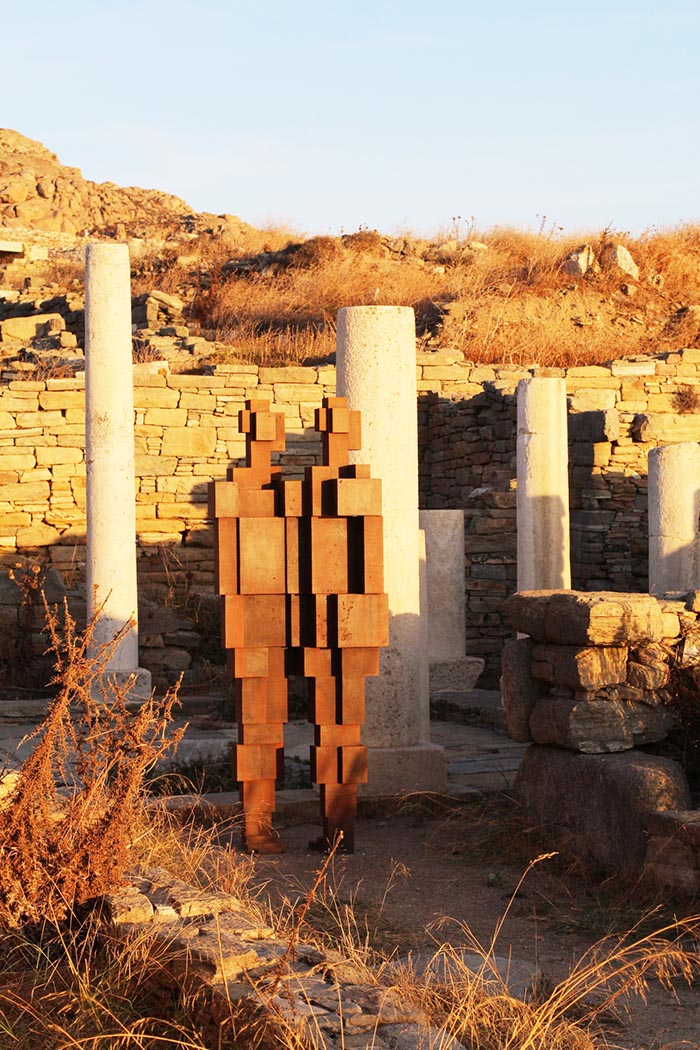 However, since we got back to Amsterdam it's hardly stopped raining. Hard to believe my toes were tripping along warm sandy beaches just a few days ago!